Candidates for the university’s student representative council and student union council election said InDaily that on August 16, they attended a presentation and were told there were rules about how they should discuss former AUU renamed YouX earlier this year.

A slide of the presentation seen by InDaily said, “All of the election candidates (YouX Board & SRC) can’t talk about the rebranding of AUU to YouX other than in support.”

He said any breach would result in unspecified ‘sanctions’ being applied to applicants.

The presentation gave examples of breaches of the new rules, including wearing AUU-branded t-shirts or comments such as “brand switching is bad” or “I will switch brands if elected”. 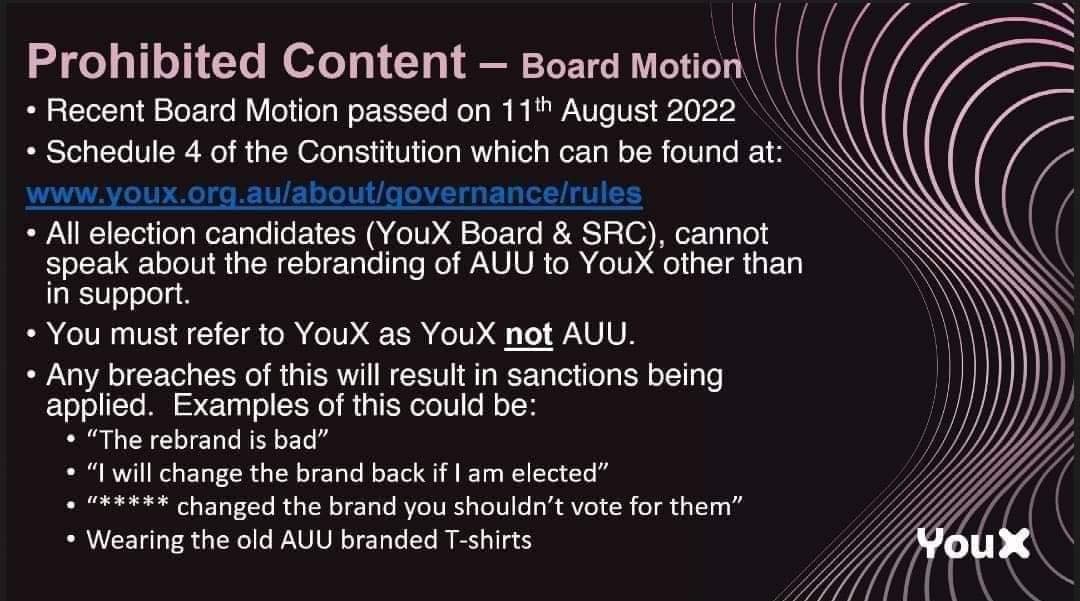 It comes after YouX denied a student freedom of information request about the cost and rationale for the rebranding, with the state ombudsman saying after investigation that the union had to provide the information, but he refused his request.

A candidate for the YouX board of directors who did not wish to be nominated said InDaily that the presentation and restrictions surrounding the rebranding debate were “appalling”.

“It’s political censorship; Since this is a student election, we can’t talk about such a contentious political issue as rebranding? ” they said.

“We know why this amendment was passed and its intent – to suppress all criticism and prevent people from campaigning on this issue.”

On August 18, the CBC passed a motion condemning the restrictions.

“Students need to know about the undemocratic processes of the student body that is supposed to represent them,” said one candidate.

A spokesperson for YouX said InDaily there was “miscommunication” around the right to criticize the rebranding, which had since been resolved.

“Student elections follow free and fair democratic principles of best practice and that candidates may criticize or criticize any action by YouX and its affiliates, including the recent rebranding,” they said.

“The miscommunication around the right to criticize the rebranding was resolved by the returning officer before the start of the election, each candidate in the elections was contacted and informed of their right to speak freely on this issue.

A University of Adelaide spokesperson said the institution was committed to defending the principle of freedom of expression and supporting the democratic principles that underpin free and fair elections.

“The University understands that the attached slide was an incorrect inclusion in an applicant briefing and has subsequently been corrected,” the spokesperson said.

The polls for the student elections end today.

Media diversity is under threat in Australia – nowhere more than in South Australia. The state needs more than one voice to guide it, and you can help with a donation of any size to InDaily. Your contribution goes directly to helping our journalists uncover the facts. Please click below to help InDaily continue to uncover the facts.